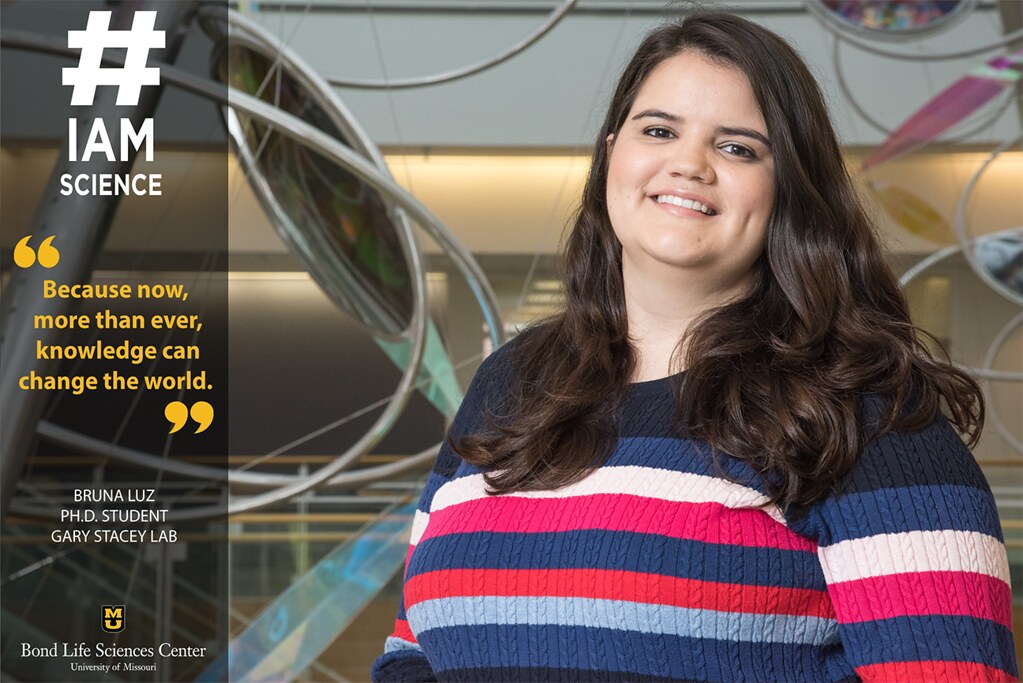 At four years old, first year Ph.D. student Bruna Luz was running around and catching bugs in her backyard just to stare at them, trying to understand how they worked.

“Biology has always been part of my life,” Luz said.

Now, Luz studies soybean genetics and how soybeans interact with rhizobia in the Gary Stacey lab at Bond LSC.

Rhizobia are bacteria that fix nitrogen in the soil, providing nutrients to the soybean plant. In exchange, the bacteria feed off of photosynthesis products created by the plant, forming a symbiotic relationship. Luz and the Stacey lab are trying to further understand the genetic factors of this relationship.

If researchers can understand and therefore manipulate this interaction, this nitrogen-providing ability can be transferred this nitrogen-providing ability to other plants that require large amounts of nitrogen, such as corn. This way, farmers cut costs by not having to add nitrogen fertilizers, and it would decrease the environmental effects like water pollution from fertilizer runoff and greenhouse gases created from excess gas emissions from soil microbe metabolism.

“I am a biologist and from my perspective, it’s interesting to see how this area can affect the environment because the increase of agriculture has been crazy, and we’re not doing much to avoid environmental impact,” Luz said.

By solely relying on the natural production of nitrogen for plants, farmers could decrease the amount of nitrogen fertilizer used in their agriculture activities. Even though helping the environment is a large motivation for Luz, the study hasn’t reached the applied research phase.

“What we are doing is basically trying to discover new things,” Luz said. “So, my biggest motivation is knowledge and trying to understand how things actually work.”

Luz decided to pursue her Ph.D. at Mizzou after talking with Gary Stacey, professor of plant sciences and biochemistry, when he visited the Federal University of Paraná in Brazil (UFPR). Luz graduated from UFPR in the spring of 2019 and enrolled at Mizzou in the fall.

Other than going to Canada in high school, Luz hasn’t traveled much outside of Brazil.

“I think [the transition] was pretty smooth,” Luz said. “The first few days were kind of shocking, just from seeing people dress a little differently and sometimes not understanding what people say. I used to be an English teacher back in Brazil…I understand mostly everybody, but there were some people that took me a while in the beginning.”

Luz’s husband and dog joined her in Columbia in October.

“It was more of a transition as a family here,” Luz said. “It’s been a little harder for my husband who is new to the country and has never been to an English-speaking country before.”

However, she says the dog is fine.

Whether Luz is in the lab or working from home, her curious nature drives her, just like when she was four years old.