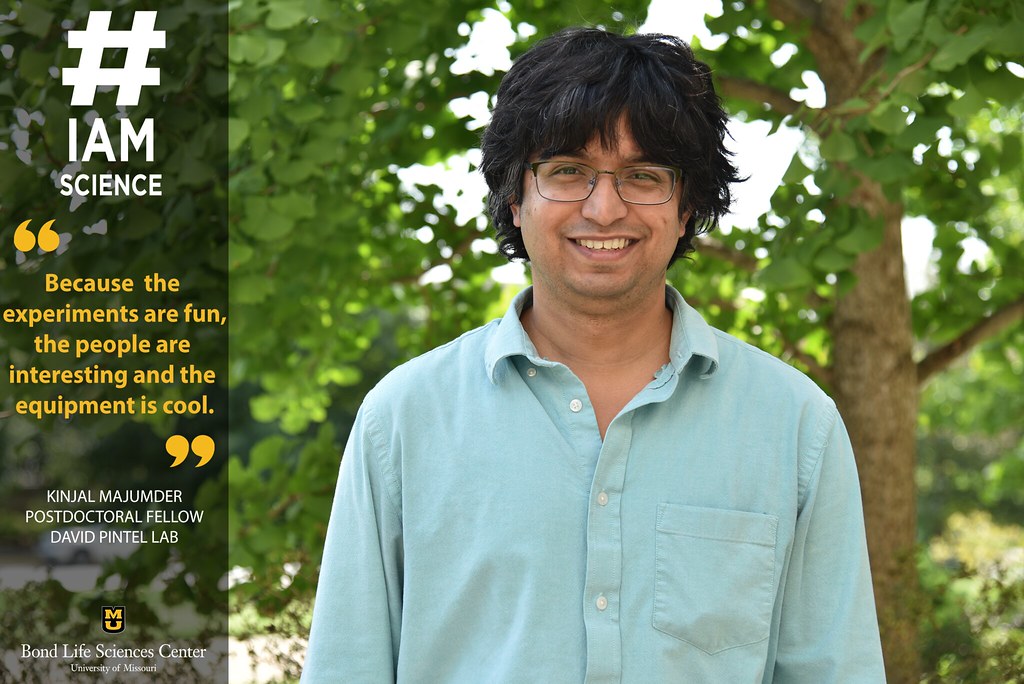 It was another day in the lab. Kinjal Majumder, a postdoctoral fellow in the David Pintel lab at Bond Life Sciences Center, was working on his research and stopped to check his email. At that moment, he found out he just won a $700,000 grant from the National Institutes of Health.

“I wish I could say something more high minded about it, but honestly, at that point, you’re like, ‘Oh, thank God. I got the award,’” Majumder said. “Then I thought, ‘Alright. I’m gonna go back to my experiments.’”

Majumder won the NIH Pathway to Independence award from the National Institute of Allergy and Infectious Diseases that helps postdoctoral research fellows transition from working under a research mentor to starting their own lab. The application process takes time, so Majumder had to wait almost a year and a half from the time he submitted his application.

“It’s very humbling and honestly I am still processing it,” Majumder said. “The way these awards work is that you apply, you hope for the best, you walk away and try not to think about the possible outcomes.”

According to 2019 data from NIAID, applicants have a 19.1% success rate in receiving the award.

“No, I’m not surprised at all,” said Maria Boftsi, graduate student in the Pintel lab. “I think he’s worth it. He works very hard. He loves research. He loves being in the lab and doing experiments.”

Even when Majumder first started at Bond LSC, he showed promise.

“He’s a very imaginative guy, and he’s got a lot of energy,” said David Pintel, endowed professor in medical research Molecular Microbiology and Immunology. “He’s very forward thinking and he’s very creative. Those are the kind of scientists that can get to another level because they do experiments that most people wouldn’t think of.”

When he first joined Pintel’s lab, they were trying to figure out where a virus goes once it enters a cell.

The lab studies a small, single stranded DNA virus called, Minute Virus of Mice, which is a parvovirus. According to Majumder, it’s a good prototype to study how small DNA viruses in general navigate the host cell’s environment to establish infection.

“So, when we started asking where a virus localizes in the nucleus of a host cell, I realized that I possessed the expertise in the techniques we need to answer those basic questions in virology [techniques I had learned during my Ph.D. at Washington University],” Majumder said. “We jumped into it headfirst and experiments started working.”

Researchers originally thought viruses set up replication centers in the nucleus of cells by randomly interacting with the factors they need to replicate. However, Majumder and a previous graduate student in the lab, Matt Fuller, started to test whether viruses went to specific places in the nucleus, particularly on the cellular genome where factors already exist to facilitate virus replication.

“For a lot of reasons, it seemed a reasonable idea although people hadn’t thought about that before, certainly in our lab,” Pintel said. “So, they started doing the experiments, and they found that’s actually what happens.”

Majumder has been working at Bond LSC for the past five years doing many collaborations.

“He has a lot of knowledge and lab experience so whenever I have troubles and I need to troubleshoot experiments, I will talk to him,” Boftsi said. “He will share thoughts, and he’ll give me advice. His advice is always helpful.”

Majumder has been studying virology ever since he first started as a post doctorate in the Pintel lab. His interest began in graduate school thanks to his colleagues in the immunology graduate program at Washington University in St. Louis.

“I had several friends in graduate school who were virologists and studied how the immune system responds to different types of viral infection. Every time they presented at departmental seminar, they insisted that viruses were super cool,” Majumder said. “Eventually I decided that, ‘Hey, maybe I’ll check this out and see what the fuss is about.’”

Turns out it was worth the hype.

Now, Majumder is going to use the grant money to further his research on studying how viruses establish infection in host cells, usurp host proteins to replicate and spread to neighboring cells.

“In this proposal, I want to study the nuts and bolts of this process and find out what are the proteins that the virus is hijacking from the cell,” Majumder said. “How is it using those proteins to replicate in the cell, and then how is it further damaging the cell’s DNA so that it creates new viral replication centers?”

Other than it being “really cool science,” as Majumder puts it, this research can eventually be applicable to human diseases. Some parvoviruses can even be modified to target cancer cells.

Majumder is planning on continuing this research in his own lab at the University of Wisconsin-Madison at the Institute for Molecular Virology and McArdle Laboratory for Cancer Research starting in October 2020.

Majumder received help from Bond LSC investigators David Pintel, Christian Lorson, Ron Mittler, Trupti Joshi, the MMI department faculty, the MU Postdoc Association and the MMI postdoctoral fellows in the assembly of his K99/R00 application. Majumder also relied on the DNA Core and the Molecular Cytology Core at the Bond LSC for experimental support. Majumder was funded for his postdoctoral research by a Ruth L. Kirschstein Postdoctoral Individual National Service Award by the NIH.