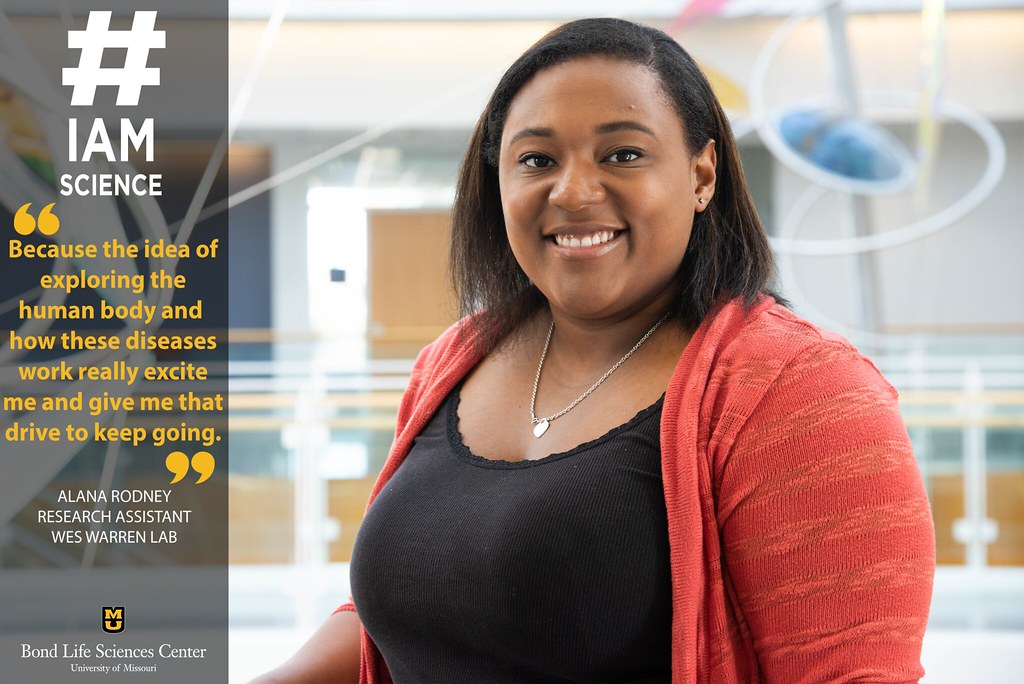 Research assistant Alana Rodney walked into her high school science class a few years ago expecting to fill another credit. However, it was there that she found her love of genetics.

“I just remember doing the lab and I learned how to use a pipette,” Rodney said. “I was like, ‘Oh, my goodness. This is so cool.’”

Fast forward to now and Rodney just completed her undergraduate degree in May 2019. And she’s not stopping there as she now pursues a master’s in animal science, genetics and genomics to create better treatments for common diseases and cancers.

“I want to eventually study cancers in humans and disease treatments for different types of cancers and other diseases that affect people in general, but especially the Black community because that’s really important to me,” Rodney said.

Rodney plans on eventually applying what she learns from the genome of cats to humans, especially cancer research.

“Cancer definitely has had a big effect on my family,” Rodney said. “A lot of people in my family have breast cancer and other types of diseases. I do think some of that is due to the environment that my family was in. I know that has a direct effect on the genetics of a person. So, some of this hits close to home for me.”

Rodney entered the world of research as an undergrad through the Initiative for Maximizing Student Diversity (IMSD) program. It is now called the Maximizing Access to Research Careers (MARC) program.

“The IMSD/MARC program is also one of the main reasons that I am in science right now,” Rodney said.

IMSD/MARC helps develop the research and professional skills of students from underrepresented groups by paying students to work in labs and exposing them to research.

“The IMSD/MARC program gave me a real sense of community in science,” Rodney said. “I was with a bunch of other students who have similar debt and probably wouldn’t be in grad school if it wasn’t for that program. It really gave me the motivation and push I needed to keep going even when school got hard. Having a community to really say, ‘Okay, let’s study. Okay, let’s talk about it.’”

For the past year, Rodney has been in the Wes Warren lab at the Bond Life Sciences Center working on bioinformatics and experiments for her thesis project.

“She’s been a joy to work with, and she’s very hungry to learn,” said Warren, a primary investigator at Bond LSC. “That’s what I really value in anybody that I work with.”

Rodney recently submitted her first paper to the journal Scientific Reports where she was the first author. The paper explored the effectiveness of whole-exome sequencing, (WES) which is a cost-effective strategy that sequences coding regions in DNA.

WES is usually used on human diseases that express multiple observable characteristics called, phenotypes. This makes it hard to classify which disease it is. WES also helps to identify alleles in genes that cause certain diseases.

In this instance, WES was applied to the DNA of diseased cats and was compared to the DNA of healthy cats as a baseline. WES discovered new variants — differences from the norm — for certain kidney disease in cats.

“That puts it out into the literature so that veterinarians and scientists that are interested in investigating that particular disease now have a candidate they can pursue,” Warren said.

The new variants were labeled as potential causative alleles of the kidney disease in cats.

Other strategies like whole genome sequencing cost more and provide slower results, so demonstrating WES as an effective option for research can help further the field.

In addition to her experiments, Rodney loves introducing children to the world of science.

“I’m really passionate about outreach and working with the youth and supporting them,” Rodney said. “I like to do science outreach, so I’ll go to elementary schools and talk with kids in the neighborhood, and if they want to do a science experiment, I’ll do it with them.”

Maybe in one of those science classrooms, Rodney can inspire a new student to pursue a field they love, just like her.