Finding how a Virus Navigates the Nucleus of a Cell 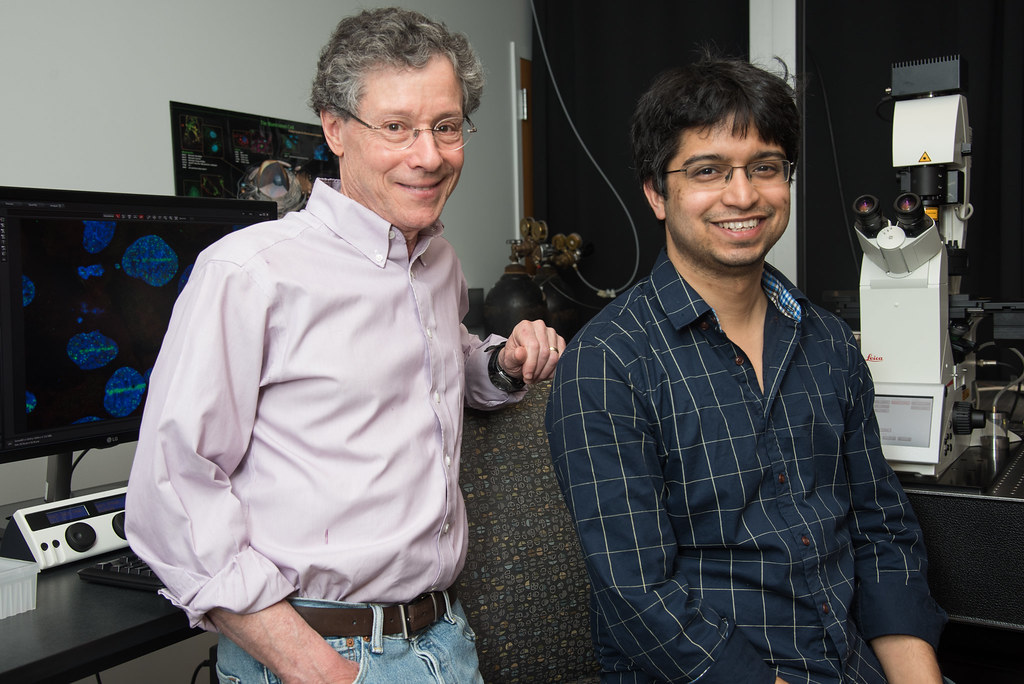 Majumder, a former postdoctoral fellow in the Pintel lab at Bond Life Sciences Center, spent the past four years looking at how the parvovirus, Minute Virus of Mice (MVM), is getting to the sites in the nucleus that it needs to replicate.

Parvovirus is used as a model to study virus behavior because it is a simple, single stranded DNA virus. MVM infects mouse cells and transformed human cells.

The work builds off a paper the lab published back in 2018 where Majumder and the Pintel lab looked at where a virus goes inside the nucleus of a cell. The results of this study were published in PLOS Pathogens in October and make progress towards understanding how viruses can localize to distinct sites to set up replication centers.

“This was the next logical step in the laundry list of questions to try and figure out how it’s getting there,” Majumder said. “This is important because we’re interested in the basic mechanisms of how a virus does what it does. So, using the parvoviruses as a model system, we can slowly chip away at these questions.”

Based on their previous work, Majumder had a good idea of where the virus went once in a cell, but he had to figure out how it was happening. He found that the non-structural protein (NS1) of the virus carries the viral DNA to sites on the cell’s genome which are prone to incurring DNA breaks, after which it can start to replicate. The genome is the set of genetic material of an organism, so it is quite important for the cell.

The NS1 protein is critical for creating new copies of the virus and binds to damaged cellular DNA breaks in a cell, though it is not yet clear why.

“When the virus goes in the cell, it seeks regions where there is broken DNA like a heat seeking missile. The reason we think the virus is doing that is because broken DNA means that the cell has repair and replication proteins at those regions. The virus can then hijack and use the proteins to replicate itself,” Majumder said.

NS1 plays a key role in this process by binding and transporting the viral DNA to these cellular break sites to initiate replication.

Majumder used many resources that MU has to offer to complete this project. To create the break in DNA in the cell nucleus, he used a laser on the confocal microscopes at the Molecular Cytology Core in Bond LSC. He also collaborated with the MU DNA Core Facility, Informatics Research Core Facility and the Lewis Cluster in the Engineering department.

“It was really nice to have all of my resources within one building,” Majumder said. “I would go in the morning and stripe the cells, and then two minutes later I would be processing them upstairs for the next stage of the experiments, so it really expedited our research. And of course, Drs. Jurkevich and Baker, who run the Molecular Cytology Core were always a great help in the laser micro-irradiation assays. It really made the project go smoother than anticipated. These experiments were first started by Dr. Matthew Fuller in the Pintel lab in 2016, who is also a coauthor on the paper.”

Since this project, Majumder has moved to the University of Wisconsin-Madison where he is starting his own lab in the Institute for Molecular Virology. The distance has not stopped him from continuing this work.

“Dave [Pintel] has been an incredibly supportive mentor. We Zoom twice a week and we talk about experiments, things that are going on in the Pintel lab, things that are starting to happen in my lab, and stuff that we can work on together going forward,” Majumder said.

“He’s a terrific young scientist, he got a number of grants and awards while he was here, some, I think, that are really hard to get. He got a terrific job is in a terrific place,” Pintel said. “I’m very happy that I could support him and that he has something strong for him to take forward as he starts his career.”

Despite Majumder now working over 400 miles away, this project is not yet done.

“We haven’t fully completed the second step yet,” Majumder said. “We figured out that NS1 is dragging the viral DNA to the cellular site of DNA damage, but that’s only half of the picture. We’re looking at the virus’ side of the puzzle, we don’t know what’s on the host side. We want to find out what’s on the cellular side or what cellular protein is creating this bridge. That would be the next step.”

Majumder and Pintel, together with graduate student Maria Boftsi, are already beginning to study this process on a human parvovirus called Adeno-Associated Virus (AAV).

“We’re trying to do a similar thing in a different parvovirus. This is a parvovirus that people use a lot for gene therapy applications so there is a little more medical interest in it,” Pintel said.  “This is a human virus and we already know that some things are a little bit different. But we’re getting close to getting an idea of what’s happening.”

Going forward, Majumder hopes to look at more viral systems in addition to these two in order to get a basic idea on how different viruses can navigate the nuclear environment.

“We can expand into more pathogenic systems like cancer causing viruses such as Hepatitis B virus or human papillomavirus,” Majumder said. “Those viruses are more complicated, so they have a more sophisticated machinery to modify the nucleus for their purposes. They employ many different mechanisms to take over the nucleus, so trying to dissect things out in them is more challenging. Those would be the future, long-term directions of these studies.”

Find out more about this study in “The NS1 protein of the parvovirus MVM Aids in the localization of the viral genome to cellular sites of DNA damage” published in PLOS Pathogens.