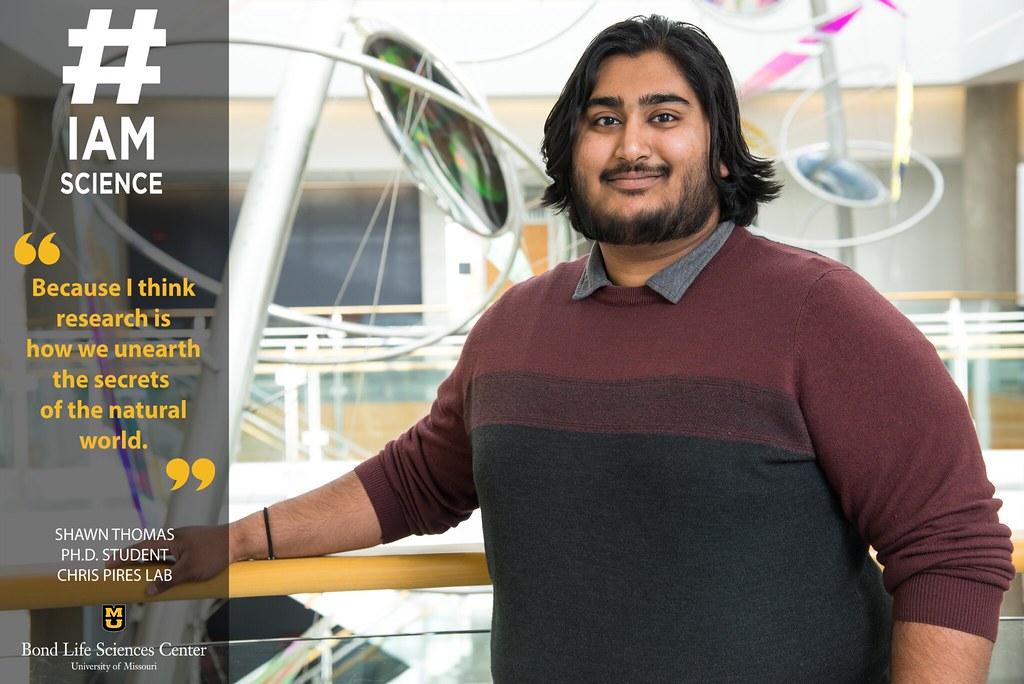 Social media botany advocate and self-proclaimed coffee snob, Shawn Thomas is the kind of person to find joy in everything.

Thomas graduated from the University of Georgia in spring 2018 and worked as a bioinformatics technician for a year with Jim Leebens-Mack before joining Chris Pires’ lab at Bond Life Sciences Center as a Ph.D. student in fall 2019. Ever since, he’s been studying how genome duplications affect plant traits in a certain group of plants that include broccoli, cauliflower and kale.

Genome duplications occur when DNA is copied multiple times in a plant when two species hybridize and come together. To study this, Thomas is looking at their wild distant relatives.

“Understanding these ancient genome duplications, how they happened and when they happened can give us an idea of how different evolutionary innovations occur,” Thomas said.

Thomas has been a part of the Pires lab for over a year now and has brought his own set of skills.

“The thing that I’ve been really impressed with him — well, two things — one is he’s very skilled with bioinformatics,” said Pires, Bond LSC principal investigator. “He doesn’t have a computer science degree, but he’s got math skills and coding and a couple of different computer languages for data wrangling genomes. But the other thing is he’s made some really hilarious YouTube videos.”

Mixing his love of plant biology and lab inside jokes, Thomas makes clever YouTube videos for fun and even for grants.

One video includes what it’s really like inside the Pires lab, despite Pires’ expectations. It involves a well-known lab joke about Thomas prioritizing his undergraduate work while putting aside his Ph.D. thesis.

Another video acted as a submission for the PACBIO 2020 Plant and Animal Sciences SMRT grant program. The video was about the need for a reference genome of Cakile — “Sea Rocket” — to enable new studies in polypoid evolution, plant migration and crop improvement. In Europe, arugula is known as “rocket,” and a closely related species to rocket is “Sea Rocket,” so Thomas didn’t miss the opportunity to have some fun with it.

Even outside of YouTube, Thomas is tech-savvy on many fronts.

“I like to play with computers, and I like genetics, so playing around with big data genomic data has been fun,” Thomas said. “The work that I do is more basic research, where we are trying to understand the fundamental concepts behind how plants work and how these different mechanisms work. For me, the curiosity of trying to understand how polyploidy works is what interests me.”

Thomas is active on Twitter talking about everything Brassica — the mustard family — to help get others engaged in the basic research of plant biology.

“When we go to a conference, I’m known for being too much of the Twitter guy, but he’s also in there tweeting all the talks,” Pires said. “So, he’s not afraid to be an advocate for botany. He clearly loves botany, and he wants to have an influence, not just a science influence but an educational outreach kind of influence.”

In the lab, Thomas often helps move things forward by reminding the group about journal clubs, reading papers and corralling the undergraduates through his love of coffee.

“I’m a bit of a coffee snob, so I like to experiment with coffee and try all the new different recipes and techniques,” Thomas said.

Before the pandemic, Thomas would regularly visit Shortwave Coffee and get a pour-over of Ethiopian coffee (he highly recommends it). Now, he makes his own each morning and talks with the undergraduates about coffee while distanced in the lab.

While Thomas is still learning how to be a mentor and exploring the diversity of plants, he has even more ahead of him.

“I’m proud of what I’ve done so far,” Thomas said. “I definitely have a long way to go, but I find enjoyment out of being able to create a nice figure or graph or get a good result that works with the story that we’re trying to tell.”