Lab explores link between genetic differences and domestication in kale 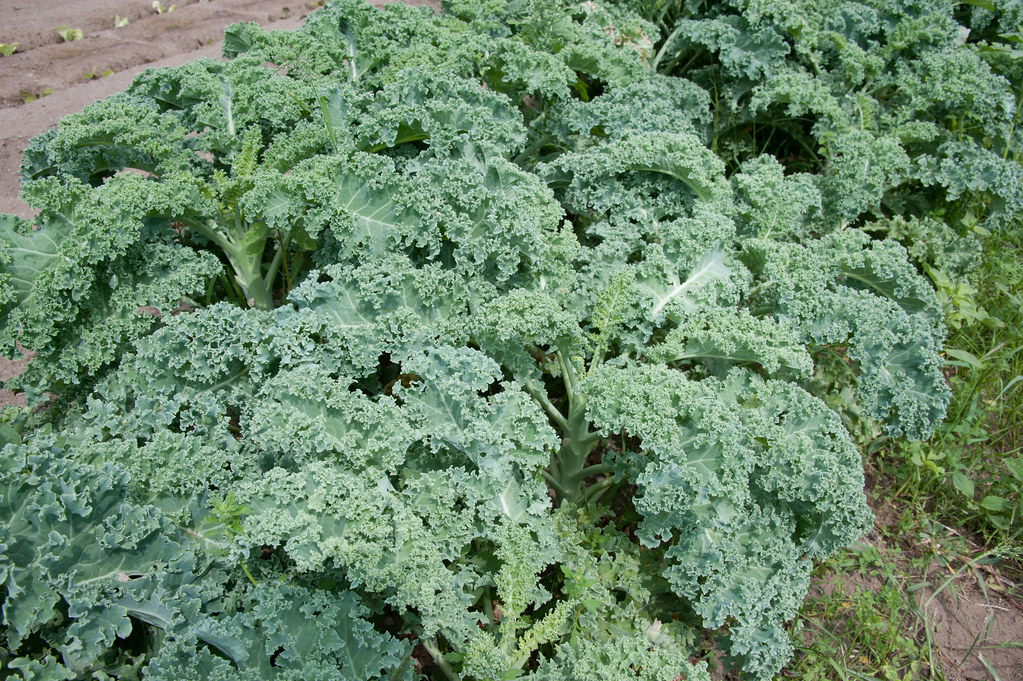 Tatiana Arias and Chad Niederhuth studied the plant, kale, in this publication. | “Kale” by photofarmer is licensed under CC BY 2.0

It is said that variety is the spice of life.

When it comes to kale, much of that variation derives from domestication, and genetic differences that evolved over thousands of years resulted in different color of leaves, nutritional value, and habit and length of growth.

Understanding the links between traits and genes could one day help plant scientists create better vegetables for us.

Eight years ago, Tatiana Arias from the Chris Pires lab and Chad Niederhuth from the John Walker and Paula McSteen lab at Bond Life Sciences Center came together to research leaf differences in this species, Brassica oleracea. Brassica oleracea includes many foods from the vegetable aisle from the grocery store like kale, cabbage, and broccoli.

“In general, people do these types of studies to narrow down some specific genes, but we tried to find a bunch of different genes that could serve different purposes in the future for basic science and developmental biology studies, but also for more applied work in crop sciences,” Arias said.

She and Niederhuth’s broad approach looked at genes that they thought could have been selected during domestication of kale. As humans farmed these leafy greens over millennia, they selected for plants that grew more upright with leaves we liked to eat, developed more ornate foliage and flowered later, differentiating kale from its sisters like broccoli and cauliflower where the flowers were the valued food product.

They compared three morphotypes of Brassica oleracea plants: kale, cabbage, and TO1000 — a specific kale line.

“We brought the evolutionary history of how Kale was domesticated from the other Brassica oleracea morphotypes. Tatiana is really good at the microscope and doing really detailed sections of different parts of the plant as they’re growing,” Chris Pires said. “They sequenced using next gen sequencing, which I’d suppose you’d call it old next gen or postmodern sequencing since it’s been so long.”

While sequencing RNA, the labs found thousands of genes expressed in these different vegetable lines.

“I am a classically trained botanist, so for me it was a very new approach to think about genomics for plants,” Arias said.

While the Pires lab handled the RNA sequencing, Niederhuth in the McSteen lab handled the bioinformatics analysis, the mapping of sequence data, and the identification of the differentially expressed genes.

“It was a team effort between Tatiana and I, she was really the expert in studying these different varieties and their morphological differences and she generated a lot of the data,” Niederhuth said. “I brought to that some of my expertise in gene expression data.”

Through their work, Arias and Niederhuth found 3,958 expressed genes that separated kale from cabbage and TO1000. Some of these differences were in genes that regulate vegetative and reproductive transitions — things that create the very different look of cabbage versus kale.

Some genes they found in kale were particularly interesting. These were involved in leaf morphology, plant structure, and nutrition and were expressed differently, allowing them to identify a set of genes that may be important in kale domestication. Those genes would link, for example, to why kale is more upright and cabbage leaves curl into a head or the variation in color of the leaves.

“I didn’t necessarily know what to expect going into it,” Niederhuth said. “It was interesting to see some results that were related to some of the differences in the phenotypes we observed. Before this I had never worked with Brassica oleracea before, it was the first time I was working with genomic data from a species other than Arabidopsis. It helped me begin working with a variety of different species in many ways.”

While this research was conducted over eight years ago, Arias and Niederhuth recently published the findings.

“It’s nice to have one of many projects off my plate, and I’m glad that it’s finally gotten out there,” Niederhuth said. “This is just how life works where people in this career are oftentimes moving and things get set aside. I am glad that after all these years, we’re finally able to come together again and get it finished.”

To read more of Arias’ and Niederhuth’s research, check out the March article published on the Frontiers in Plant Science website titled, “The Molecular Basis of Kale Domestication: Transcriptional Profiling of Developing Leaves Provides New Insights Into the Evolution of a Brassica oleracea Vegetative Morphotype.”