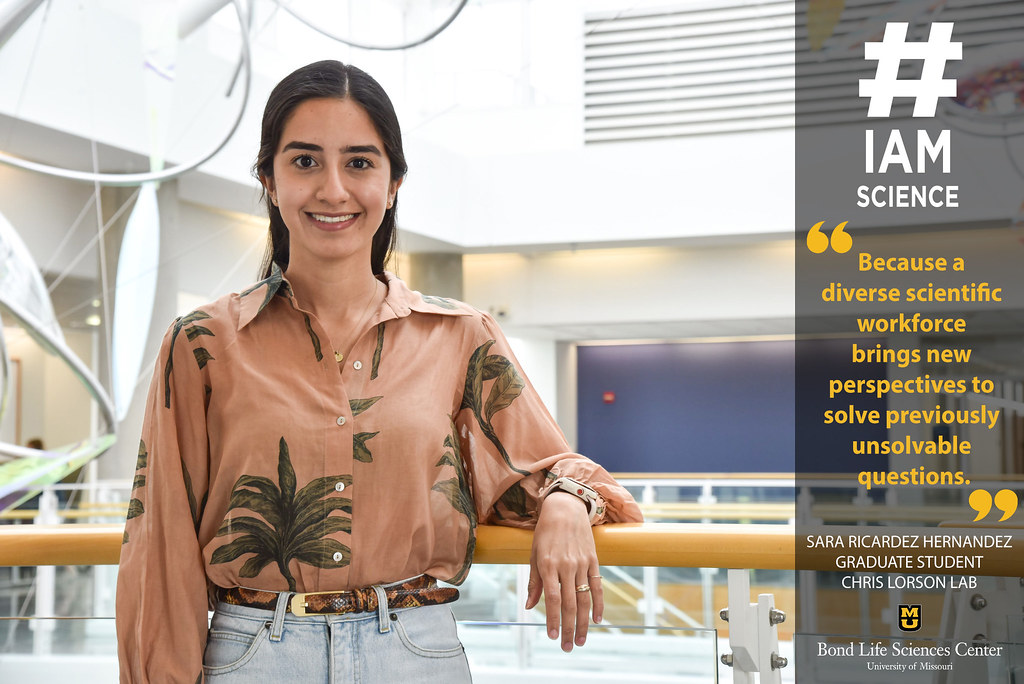 “I really like advocating for other people like myself. For example, the university that I went to for undergrad had very little mentoring for minority students, so I want to help people not only be able to get a Ph.D. but be even better scientists and have more opportunities than the ones I had,” said Ricardez Hernandez, a current member of the Chris Lorson lab at Bond Life Sciences Center.

She has not wasted any time. She is currently the vice president of Mizzou’s chapter of the Society for Advancement of Chicanos/Hispanics and Native Americans in Science (SACNAS). SACNAS is a program that provides networking and professional development opportunities for minority students.

“We try to help students by hosting workshops and inviting different diverse researchers so students see that they can succeed in academia and become principal investigators too,” Ricardez Hernandez said. “When I first arrived at Mizzou, I knew they had a chapter here and I was very excited about that. I even contacted some people before classes started and I was like, ‘Hey, I’m really interested in becoming a member’ — I had been president for the Hispanic Latino Association in undergrad — so I knew that I wanted to keep helping students.”

Ricardez Hernandez also serves as a graduate student mentor with MARC/IMSD (Maximizing Access to Research Careers/Initiative for Maximizing Student Diversity) at Mizzou. She currently mentors six undergraduate students where she provides support and advice regarding their research, academics, and any personal issues that may be barriers to their success.

“One of my biggest passions is mentoring and trying to push higher education into a more equitable future,” Ricardez Hernandez said. “Historically, higher education has lacked diversity, so we do not see a lot of role models for minority students like professors or PIs. Showing students that, ‘Hey, I’m here at Mizzou, I’m a minority as well and I’m passionate about what I’m doing,’ can demonstrate to undergrads that they can do that too.”

“Her mentees think highly of her. She is transparent and vulnerable in sharing her own previous challenges and that makes her so relatable,” Brian Booton, Undergraduate Director of MARC/IMSD at Mizzou, said. “I think we sometimes put mentors on a pedestal and think of them not struggling themselves or that they’ve never had difficulties, but I think she’s really authentic with the ways in which she’s grown. She’s able to reflect on those lessons and reframe them as social capital making her a very effective mentor.”

Ricardez Hernandez extends her passion for education in the lab and her studies as well. She is in the Molecular Pathogenesis and Therapeutics Program where she studies neuromuscular infantile diseases. She is currently working on the characterization of respiratory defects in spinal muscular atrophy with respiratory distress type 1 (SMARD1) and the applications for potential therapeutics.

“I think it keeps me going. Sometimes it’s hard being a graduate student, and not everything works out all the time or you have a lot of things going on but studying diseases like SMARD1 makes me want to come to lab every day and keep doing what I’m doing,” Ricardez Hernandez said.

With a few years left at Mizzou, Ricardez Hernandez plans on helping as many people as she can.

“She’s a real advocate and champion for her mentees,” Booton said. “She’s so approachable and genuine and she’s been a great asset to the program.”