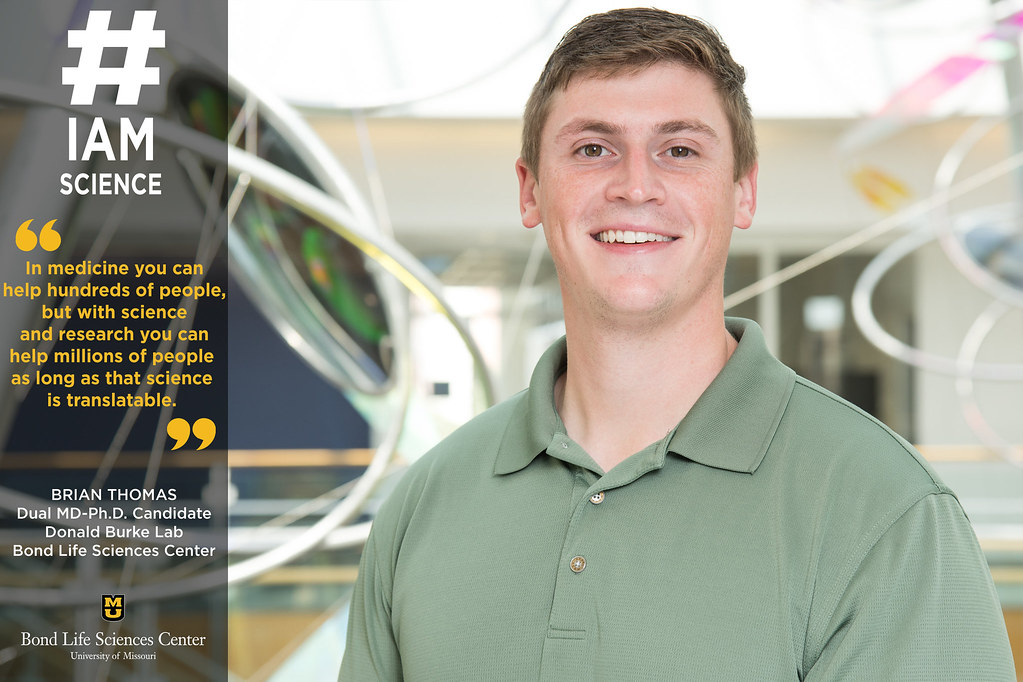 Brian Thomas’ passion for science has been shaped by the excellent mentors he has had throughout his scientific and academic career.

At Mizzou, that came from Donald Burke-Aguero.

“His mentoring style really fit with what I needed going forward,” Thomas said. “In medicine you can help hundreds of people, but with science and research you can help millions of people as long as that science is translatable.”

Thomas spent his first rotation as a medical student in the lab of the Bond Life Sciences Center scientist and professor of Molecular Microbiology & Immunology and instantly enjoyed it. Typically, medical students go through three ten-week rotations but Thomas only needed one. He quickly enjoyed the work and saw opportunities with the research in the lab.

“In my rotation last summer I really enjoyed the lab, it was a great environment,” Thomas said. “It was a really inviting environment to work in and now we get to do some really cool science.”

Thomas studies cancer immunomodulation through aptamer technology in the Burke lab. Aptamers are small DNA or RNA nucleic acids that can bind to different molecular targets, similar to puzzle pieces.

Cancer immunomodulation is a different approach to fighting cancer, where instead of using drugs to destroy cancer cells in chemotherapy, the body is encouraged to induce anti-tumor immune responses.

Finding a lab environment where Thomas could focus on cancer was incredibly important to him when choosing where he would complete his research. He wants to focus on pediatric hemotology-oncology, the combined study of blood and cancer.

Thomas began his time at the University of Missouri as an undergraduate majoring in biochemistry and spent many hours researching and completing homework in chemistry labs.

But, that’s not what sparked his passion to pursue the eight year program to become a physician-scientist with an MD-PhD. His biochemistry degree first landed him a job at Washington University in St. Louis studying novel cell death pathways in a research lab.

Through this research, Thomas used C. elegans, a transparent roundworm, to study human disease. Many of the genes in the roundworm are homologous to human genes, making them useful to study a broad range of human diseases such as neurological disorders, heart disease and kidney disease.

“That’s really where I fell in love with science,” Thomas said. “Especially the clinical translation of science, so from bench to bedside. Thankfully I had a really great mentor there that drove me to pursue my MD-Ph.D.”

These mentors impacted Thomas in various ways throughout his position at Washington University. Gary Silverman, M.D., Ph.D., is the Chairman of the Department of Pediatrics at the Washington University School of Medicine. During live meetings Silverman was one of the people Thomas would present the data they discovered and receive feedback from.

An additional mentor for Thomas was his primary investigator, Cliff Luke, Ph.D. whom Thomas worked directly for. Luke is an associate professor of pediatrics and newborn medicine at Washington University. It was Luke that helped Thomas find his love for science and joy in the meticulous work of research.

“They taught me a lot of lab techniques but more importantly about the joy for data,” Brian Thomas, MD-PhD candidate, said. “They also taught me the joy for failing and getting back up from failure and just how important that is.”

Thomas returned to the University of Missouri to pursue his combination MD-Ph.D.

“I know we had good science going on here from when I was an undergraduate,” Thomas said. “I truly believe when choosing a lab to do your graduate coursework is that it’s important to find a good mentor. It doesn’t really matter the science you’re doing as long as you have a mentor who can teach you how to do good science, well-controlled science and really how to think like a scientist.”

His expected graduation from the dual degree program isn’t until 2027 or 2028, but that hasn’t stopped Thomas from thinking about where he can make the biggest impact, whether that be returning to Washington University for his residency program or being exposed to a different clinical environment outside of Missouri.