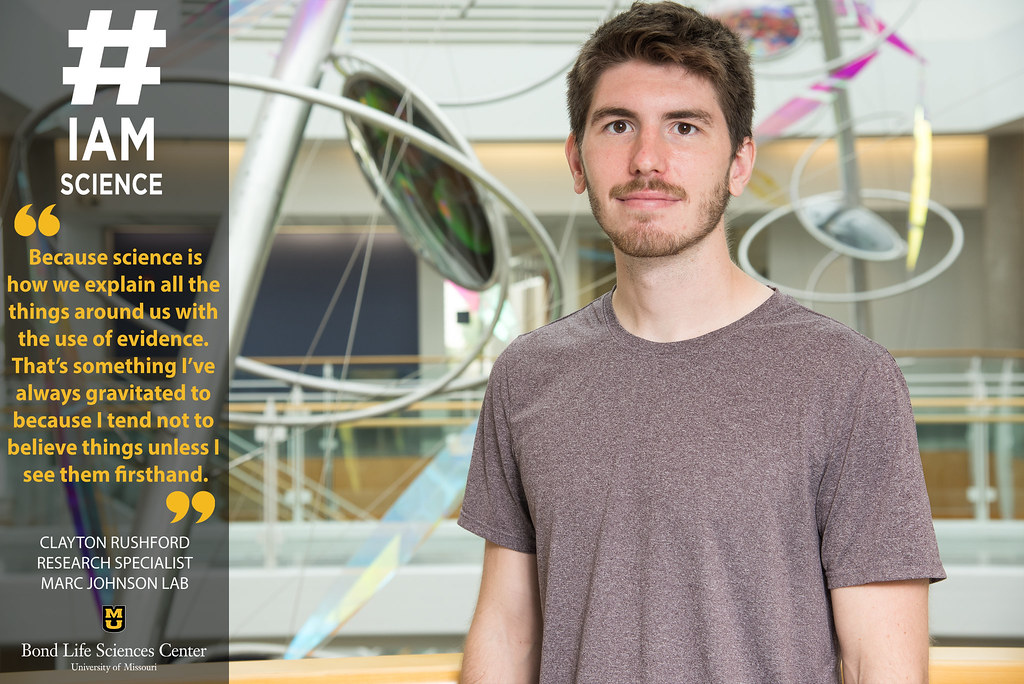 Clayton Rushford isn’t one to complain.

While in the Marc Johnson lab at the Bond Life Sciences Center, he’s the guy cheering up lab mates when experiments fail or going with the flow when he must repeat an experiment for the fifth time. As long as he’s doing science, not much can bring him down.

“It seems like a very generic answer but the fun thing about [science as a whole] is it’s more or less how we explain all the things that are going on around us with the use of evidence,” the research specialist said. “So that’s something I’ve always gravitated to because I tend not to believe things unless I see them firsthand.”

Rushford joined the Johnson lab about six months ago, originally extracting RNA from raw samples of wastewater. Now, he’s running PCR tests on the samples to look for COVID-19 mutations and early outbreaks in Missouri.

“It’s a really awesome way to track COVID on a large scale because when we test wastewater, we’re testing the entire community … So, it really provides a lot of good information for general epidemiology, and we’re hoping to maybe move out to some other viruses since it’s really close within our system,” Rushford said.

Now that he’s working at Bond LSC, Rushford found a chance to reflect on his biggest accomplishments.

“Just making it here,” Rushford said. “A lot of what I’ve done, it’s been on a whim more or less. I didn’t really go into college with a plan … But I feel like I’ve done a good job at making it up as I go, and I feel like I’ve made good use of my time while I’m here. I don’t think I’ve wasted my time in Columbia, and I think I’ve gained a lot out of it.”

While Rushford tends to live moment to moment, it has served him well. He took a chance on plant science classes at Mizzou because they sounded interesting. He graduated from Mizzou in 2017 with that plant science degree and leaped into a master’s program.

Rushford soon found himself studying dissemination through irrigation systems, which coincidently lined up very close to the Johnson’s lab focus. When Rushford graduated in 2020, he knew the Johnson lab position was one of a kind.

“I picked up this job because the parallels with my master’s program were just a little too good, and so it was really hard to pass up that opportunity to see something involving epidemiology and water systems, just be able to bounce from one lab to another,” Rushford said. “It was kind of a way to stay in this little niche area that seems to be developing in my career.”

The similarities helped him adapt quickly.

“I think when people come into the lab, they are quiet, and they do what they’re told for a while and it takes them quite some time to really start thinking on their own,” said Carolyn Robinson, Ph.D. candidate in the Johnson lab. “[Rushford] did that really quickly. So that was cool growth to see for sure.”

Robinson helps Rushford the most in the lab and they often talk about anything from movies, the Yu-Gi-Oh! card game or their puppies. The two have even taken their pups on playdates together.

However, what Robinson appreciates the most about Rushford is his attitude.

“Science can be frustrating, and it can be easy to fall into that,” Robinson said. “There’s a lot of repetition, so it is really important to be able to stay positive and to be able to keep a good morale, if you will, when things aren’t working and whatnot. So, it’s just really nice to have somebody who’s focused more on good things than something that’s not working.”

With only six months under his belt and many more to go, Rushford is happy to keep building an environment of optimism in the lab.