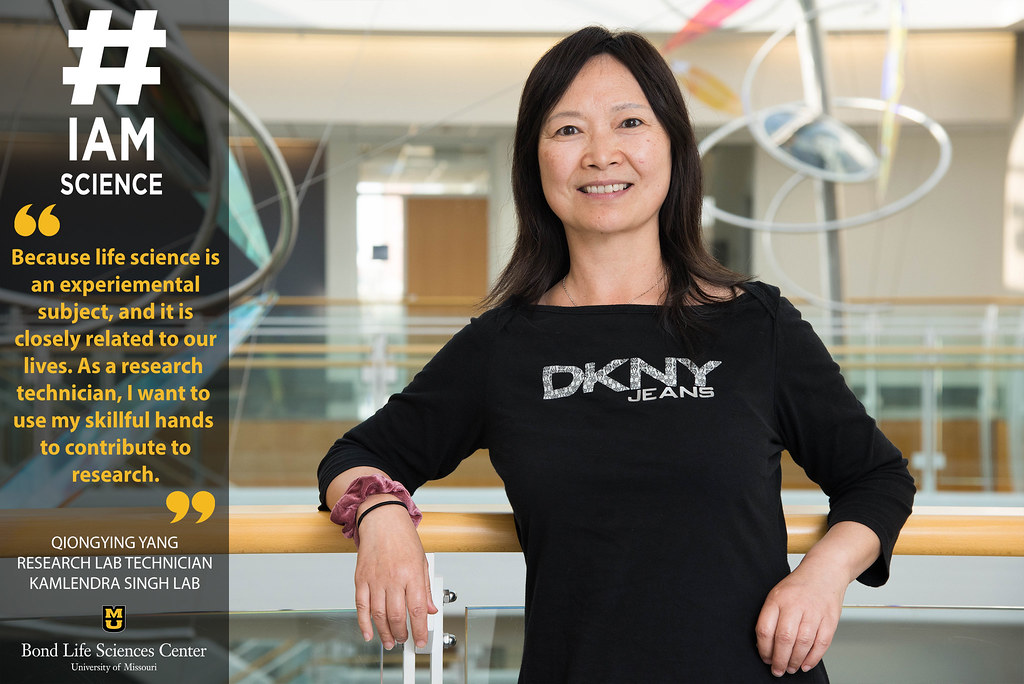 In the mornings after her usual walk on the local trails, research technician Qiongying Yang heads to the Kamlendra Singh lab. Her desk is surrounded by large empty beakers and the windowsill houses two big, beautiful flowerpots she gave her desk mate.

Her soft-spoken manner, warmth and mathematical talent aided her in helping multiple labs throughout Bond Life Sciences Center for the past 17 years.

Yang came to the US from China in 1999. In 2003, she came to Mizzou and found herself as a research technician at Bond LSC a year later. She has worked with HIV and protein structure in multiple labs along with operating equipment.

“I’m pretty sure if you give me the protocol, I can do it,” Yang said. “I think I save a lot of money because I don’t need to repeat things.”

However, Yang regrets not learning more about the biology behind her technician work. Researchers will sometimes ask her why an experiment isn’t working beyond the equipment, and she can’t answer.

“In my experience, I think if something isn’t right, I can ask [the researchers],” Yang said. “If they find out, I can find out. I think maybe if I know more, I can know what happened.”

Today, one of her closest friends is research scientist Hailian Shen in the Lorson lab.

“[Yang] said … she should actually start to learn the biology,” Shen said. “Her maths is very good, very, very good. Because she is very sensitive to numbers … I always use a calculator or use a computer or at least use a piece of paper. She can just use her mind. I remember before she talked to me, she was working in a plant lab and did soybean work [with the rest of the lab]. Because the soybean gene transfection is a little bit difficult, other people cannot get success. She can … She quickly grasped the technique after practice and did very good job.”

Even though Yang wants to learn more, Shen believes Yang “has independent thinking when facing problems and tries to find ways to solve them.”

They met a little before the COVID-19 pandemic started in February 2020. Their first interaction was when Shen couldn’t find a mask after coming into the center, and Yang gave her an extra one.

“Masks were so difficult to get [at that time], so I knew she was really good,” Shen said

A year and 10 months later, the two share photos of their families while Yang occasionally brings Shen food and flowers.

“She said, ‘Tomorrow maybe my husband will cook delicious food. I will bring some for you.’ I said, ‘No, no, no.’ But she always brings it for me,” Shen said. “Sometimes, she even won’t tell me directly and bring it for me … To me, I like that she is warm-hearted.”

Outside of Bond LSC and before the pandemic, Yang was part of the Chinese Performing Arts Group. The group performed traditional Chinese dances on campus and in the city. In 2018, the group performed in Mizzou’s International Night and the Homecoming parade.

Yang said she enjoys dancing because she feels passionate when she dances and can share her Chinese culture.

Even though Yang doesn’t plan on leaving Bond LSC anytime soon, she wants to learn more about the science behind her technician work. She also hopes to rejoin the dance group next year when it’s safer. For now, she’ll keep practicing protocol and sharing her favorite foods.