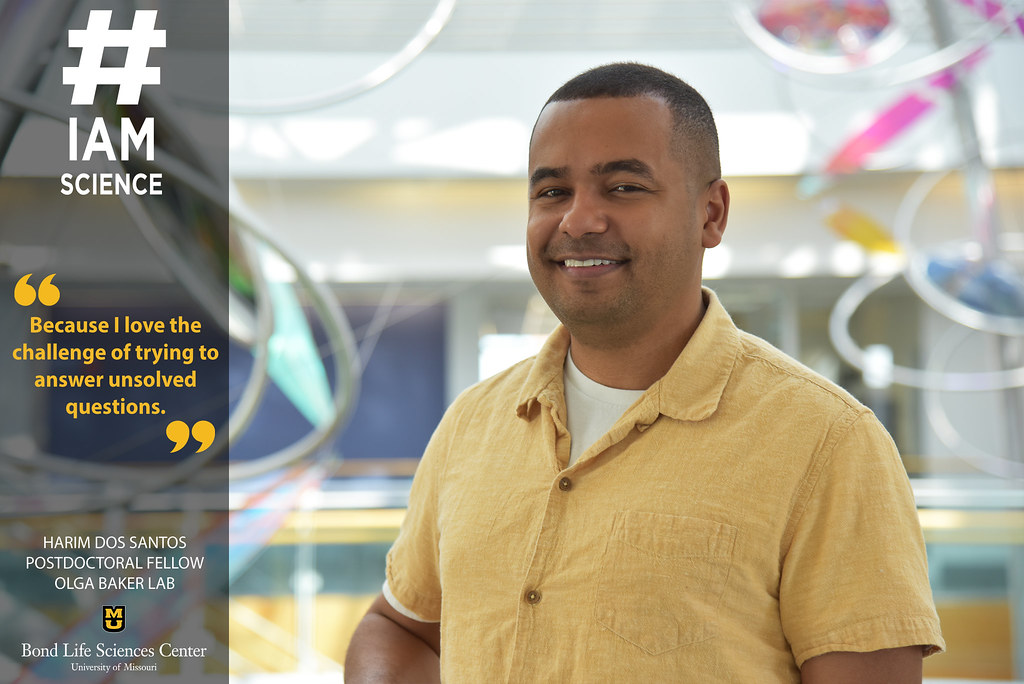 Don’t mistake Harim Dos Santos’ kind demeanor and introspective silence for a lack of ambition. On the contrary, his head is full of reflection and big dreams.

Coming from Brazil, Dos Santos has achieved quite a few of those dreams including researching at an American university. Dos Santos is now a postdoctoral fellow in the Olga Baker lab at Bond Life Sciences Center, developing ways to treat salivary gland damage in head and neck cancer patients and in Sjögren’s syndrome patients.

“I’m loving it [here], really,” Dos Santos said. “It’s good to see that there’s not only a dream. Things happen when you go for it.”

From Brazil to Mexico to Portugal, Dos Santos has been developing his career in dentistry and salivary gland research since 2012.

“In the beginning, it was hard,” Dos Santos said. “But now I see that I’m blessed. I’m blessed to be studying, working in different places … I feel like I’m going up.”

He says his biggest professional achievement so far has been joining the Baker lab. In 2018 he had a Skype interview with principal investigator Olga Baker, back when her lab was in Utah. At that time, Dos Santos was still learning English and practiced his interview answers to questions he thought Baker would ask.

But then Baker sent him one of her papers. He had just 100 words to critique it and used 96.

He got the job.

“I just like, ‘Oh my gosh. I’m going to the USA,’ and I remember I started crying,” Dos Santos said. “I was like, ‘That’s my chance.’ Ninety-six words changing my life.”

To Baker, his organization and clinical experience made him a good candidate. What made him a great candidate, however, was when he pointed out she should be testing Sjögren’s disease in both male and female mice even though the disease mainly affects women.

“I see him as a future P.I.,” Baker said. “He has all the elements necessary. He’s very creative, very organized. He has leadership, and he is a go-getter. I ask him to do one thing. He does five.”

In May 2020 — the height of the pandemic — the lab moved from Utah to the University of Missouri. Baker drove cross country with her family, and Dos Santos flew over early by himself. For that first month, he came to Baker’s place many times to eat dinner, brainstorm protocol and help establish the lab.

“We became kind of a family,” Baker said.

Baker and her family showed him around Columbia, and they went to see the McBaine Burr Oak tree, known as one of the oldest trees in Missouri.

Since then, the lab has been up and running without slowing down. Dos Santos’s work focuses on testing the effectiveness of different hydrogels to promote tissue regeneration in mice. These hydrogels are synthetic networks of crosslinked polymer chains that can take in large amounts of water.

He also recently published a paper focusing on finding specific receptors in the salivary glands of humans. For certain drugs to be effective, such as specialized pro-resolving lipid mediators, researchers need to find the receptors present in the target tissue.

“If the receptors are there, we know that we can use different combinations of drugs to try to improve it and decrease inflammation and also improve the quality of life of the Sjögren’s syndrome patients,” Dos Santos said.

In addition to his research, he’s organizing the prestigious Salivary Glands & Exocrine Biology Gordan Research Seminar as co-chair. The conference is in California in February 2023.

Dos Santos will keep going forward, while his dreams just get larger.