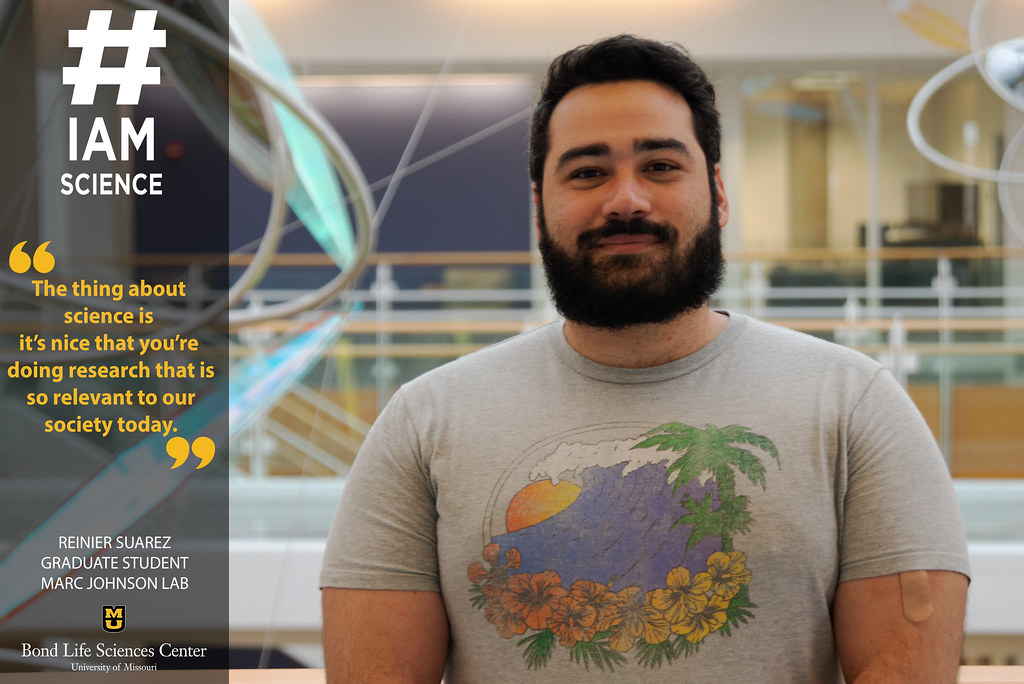 When one of Reinier Suarez’s undergraduate professors suggested he go to graduate school, he was confused.

Three years later, Suarez is a first-year graduate student studying COVID-19 variants. Suarez came to Mizzou as part of the university’s Post-Baccalaureate Research Education Program (PREP), a stepping-stone between his undergraduate studies at Florida International University and his graduate studies at MU. He joined Marc Johnson’s lab at Bond Life Sciences Center as a PREP scholar and liked it enough to stay and continue his studies.

“Marc Johnson is a great [principle investigator], he really takes the time to talk to the students. He’s very honest,” Suarez said.

While Suarez started with HIV research, he soon switched his focus to coronaviruses when MU shut down at the beginning of the pandemic.

“[Johnson] saw it as a good opportunity to expand the lab, and I agreed,” Suarez said.

“If the [pseudotyped particles] infect a cell, the cells turn green … and then you can measure how much green there is in compared to all the cells that you have,” Suarez said.

By measuring the amount of green, Suarez measures how many cells were infected by the particles. Suarez uses this method to test different mutations of the COVID-19 spike protein to see which version increases infectivity.

Suarez also contributes to the lab’s other COVID-19 project testing wastewater samples from various locations in Missouri and around the U.S. to identify amounts of COVID-19 spike proteins in the water.

“You can actually see when a locality is about to hit an outbreak before they get there,” Suarez said.

As the only graduate student in the Johnson lab, Suarez has taken on greater research responsibilities as well as teaching undergraduates – a long way from his start in the lab as a PREP scholar.

As a PREP scholar, Suarez worked closely with Johnson to prepare for graduate school.

“It was clear that he had holes in his background which required chiseling,” Johnson said, but he also commended Suarez’s work ethic.

“His motivation has been second to none,” Johnson said.

As an undergraduate, Suarez studied at Florida International University where he pursued dentistry. Coming from Miami, it seemed like a natural step for Suarez.

“I started off with dentistry because I didn’t know what I wanted to do, I just knew I liked science, specifically biology,” Suarez said.

It was not until his last year of undergraduate studies that one of his professors suggested he look into grad school.

“I was taking her virology class and she said, ‘hey why don’t you go to grad school,’ and I was like ‘what is that, what is grad school,’” Suarez said.

Having no prior experience working in a laboratory proved an obstacle in the graduate program admissions process, but he was accepted to PREP which allowed him to improve his education and start research before attending a graduate program.

“The PREP program basically gives students the ability to see what grad school is like without having to be in grad school,” Suarez said.

During the PREP program Suarez rotated in various MU labs, but he credits much of his learning to Margaret Lange, Molecular Microbiology and Immunology assistant professor, and Johnson.

“[Lange’s] also an HIV researcher, so her and Marc Johnson work very close together,” Suarez said, “they kind of formed a co-mentorship.”

While Suarez experienced a “very nurturing environment” at MU, he still credits his decision to start research to his mentor during his undergraduate studies who suggested furthering his education.

“She set me on a path and that’s how I’m here today,” Suarez said.