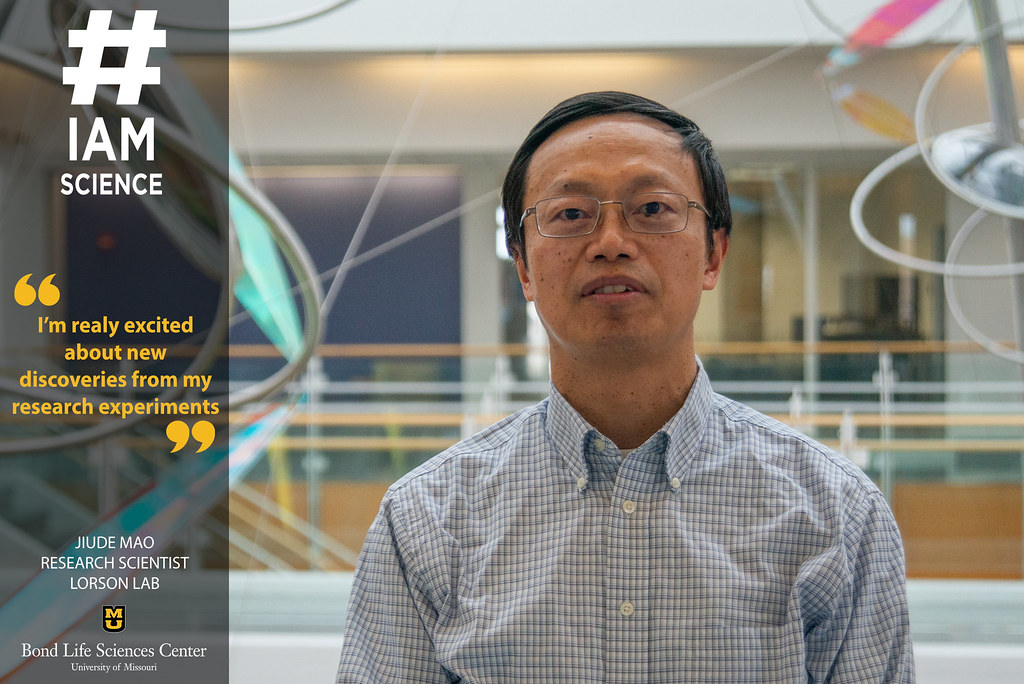 Learning has no borders for Jiude Mao. His inquisitive mindset drives him to cross research disciplines and countries chasing the answers to his questions.

Mao studies mutations in the gene Ighmbp2 that result in spinal muscular atrophy with respiratory distress type one (SMARD1) and Charcot Marie Tooth 2S (CMT2S) in the Chris Lorson lab. Mao’s research attempts to better understand the effects that different mutations have on disease severity and progression that could help develop treatment options to alleviate disease symptoms.

The idea of finding treatment for a genetic disease was not always something Mao considered possible. Growing up in China, Mao remembers a time when such research was not widely known.

“When I was in college, I did not know of any genetic disease that can be cured,” said Mao, a research scientist at Bond LSC. “But now development of FDA approved drugs and gene therapies can be used in human patients.”

Mao’s focus is on a cellular level, but he started out studying animal science at Yangzhou University in China. Intrigued by research studies being conducted in North America, Mao applied for a doctorate program after getting his bachelor’s and master’s degrees in China.

“I find [for] Western countries that do research, it’s more restricted and more model-based,” Mao said.

Mao met George Foxcroft from the University of Alberta, while the professor was attending an international conference in China. Two years later, Mao got the chance to move to Canada and study in Foxcroft’s lab as a Ph.D. student.

“I like his approach [to research] a lot, and I just followed his [example] and do science that way myself too,” Mao said.

While in Foxcroft’s lab, Mao studied reproductive physiology and attended another international conference where he met Billy Day, an MU animal science principal investigator who became his first postdoc supervisor. After working in Day’s lab, Mao stayed at MU and worked in Michael Roberts and Cheryl Rosenfeld’s labs before joining the Lorson lab.

“In every lab environment I try to learn new techniques and new fields of study,” Mao said.

Regardless of lab, Mao likes to focus on what compelled him to study science in the first place.

“Learning new things and making new discoveries even if they are challenging makes life more interesting,” he said.

In the Lorson lab, Mao focuses on understanding how mutations in the gene Ighmbp2 result in SMARD1 — a rare neurodegenerative disease marked by the deterioration of neurons that send signals from the spinal cord to muscle and the defining clinical symptom of respiratory distress. Mao, in collaboration with other members of the Lorson lab, utilizes six mouse models based on mutations seen in human patients to understand disease development and progression.

When excited by a new discovery in the lab, Mao shares his research with his family, particularly while spending more time at home over the pandemic.

“When I come to work, I focus on my work and really use these eight, nine hours at work,” Mao said. “So when I get home, my mindset is to be with my family, and if I have free time I read more science papers.”

For Mao, striking a balance between home and work life is good for both his work and his family.

“That’s how you do good science, balance work and family,” he said.

Satisfied with his experience at MU, Mao plans to continue his work at Bond LSC.

“I like Mizzou, we have so many different cores for research and the essential and critical equipment for you to use,” Mao said. “We’re really spoiled by the common equipment provided by the center. Besides your lab, you have spare state-of-the-art equipment to use.”

Having worked in science continually since his graduate studies, Mao still finds purpose in research.

“I would say I always had that passion to do science, and it seems to me I never had any moment to want to change,” Mao said.