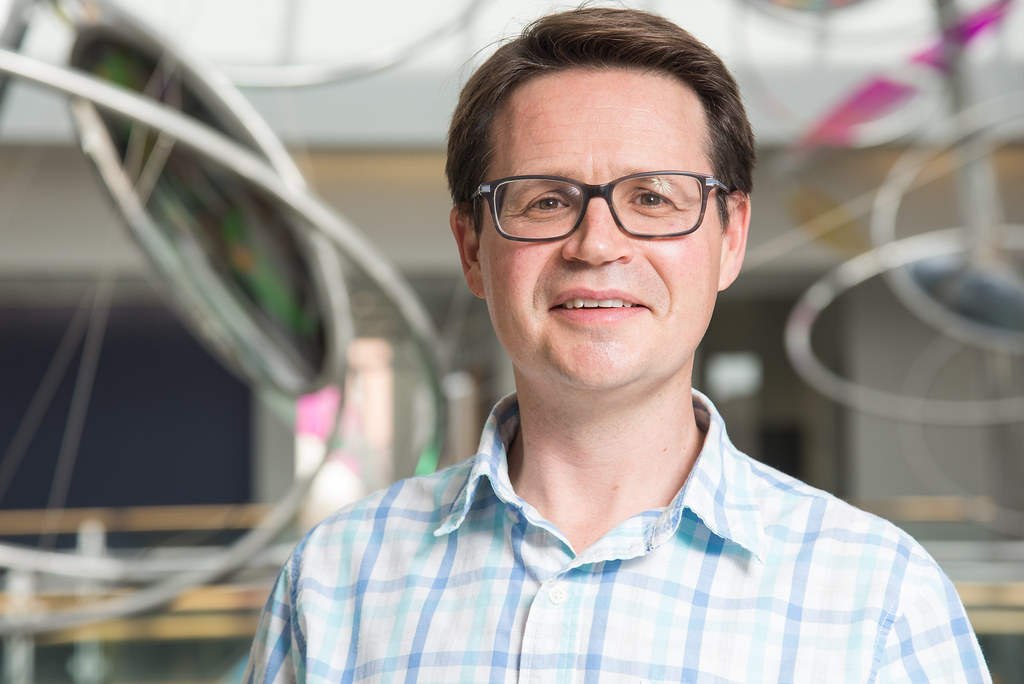 Pigs may have a reputation for being lazy and dirty but to immunologist John Driver, they are the key to understanding influenza in humans.

“Pigs are a great animal to study influenza in because they are susceptible to getting the flu,” Driver said. “They are like a mixing vessel for influenza viruses.”

Swine have their own strains of influenza virus but can also contract strains from other species like birds and humans. When that happens, these different flu viruses can recombine and create new variants in the animal that can occasionally give rise to viruses that cause human pandemics.

Driver arrived at Bond LSC in mid-January as part of an initiative to create an influenza center in Columbia with Bond principal investigator Henry Wan. While Wan works on the molecular aspects of how new influenza viruses emerge, Driver’s work focuses on the host immune system.

“We’re really interested in understanding how to prevent the next pandemic and learn how to control influenza in livestock,” Driver said.

The researchers will study how influenza viruses move between animal species and recombine into new viruses inside different hosts.

Originally from South Africa, Driver received his undergraduate degree in Animal Science from the University of Pretoria. In 2000 he traveled to Lexington, Kentucky to work at Alltech Inc, an animal feed additive company, as an intern. Before coming to Mizzou, Driver was a faculty member in the Animal Science Department at the University of Florida for ten years.

Driver hasn’t always worked with pigs. Earlier in his career, he preferred a smaller test model, the mouse.

Once he left Kentucky, he moved north to work at the Jackson Laboratory in Bar Harbor, Maine. The laboratory’s Mouse Genome Informatics database supplies information on mouse genetics and biology internationally. Here he discovered his love for immunology.

“I was totally immersed in mouse genetics and Type 1 autoimmune diabetes. It was a wonderful place to be for learning about all sorts of genetic models for various diseases,” Driver said.

Driver decided he wanted to dig deeper into his research and go beyond what a mouse model could offer him after six and a half years at the Jackson Laboratory. This landed him at the University of Florida studying pig models.

While studying influenza in mice and other small animals like ferrets is possible, Driver notes there are a lot of drawbacks compared to using pig models.

“A mouse can’t transmit the flu to another mouse and if a mouse does get the flu, it dies very easily,” he said. “Pigs transmit the flu just like we do. They cough, sneeze and get infections like humans. When we study a pig, we get a pretty good idea of what is going to happen in humans.”

Understanding viruses in pigs not only aids the swine industry but sheds light on developing vaccines and how to mitigate flu in humans as well. Mizzou is home to the National Swine Resource Center where researchers can create genetically edited pig models to study many diseases. This center is one factor that attracted Driver to MU.

“I came here to be more productive at what I do,” Driver said. “We have more animals to study [here], and we can make new models to ask more questions.”

Driver is excited to dive into the research and work with his students in the lab. His lab will look at how different cells in the pig immune system react during an influenza infection and build up resistance over time.

“I want to make real progress in understanding the host-pathogen interactions involved in influenza immunity,” he said. “I’m interested in studying rare types of immune cells and how they regulate disease resistance of the host.”

Being hands-on in the lab with his students is something Driver prioritizes. Even though his students are just starting with basic training he has enjoyed working with them.

“I like to be with my students in the trenches and running experiments with them,” he said. “It’s very rewarding to see students grow, mature, and learn things.”

Whether at his previous lab in Florida or his new home at Bond, Driver is looking forward to leading the next generation of scientists and innovators.

“It’s nice to know that they’re going to have very bright futures in science and be future leaders and I had a small contribution to play in getting them there.” Driver said.