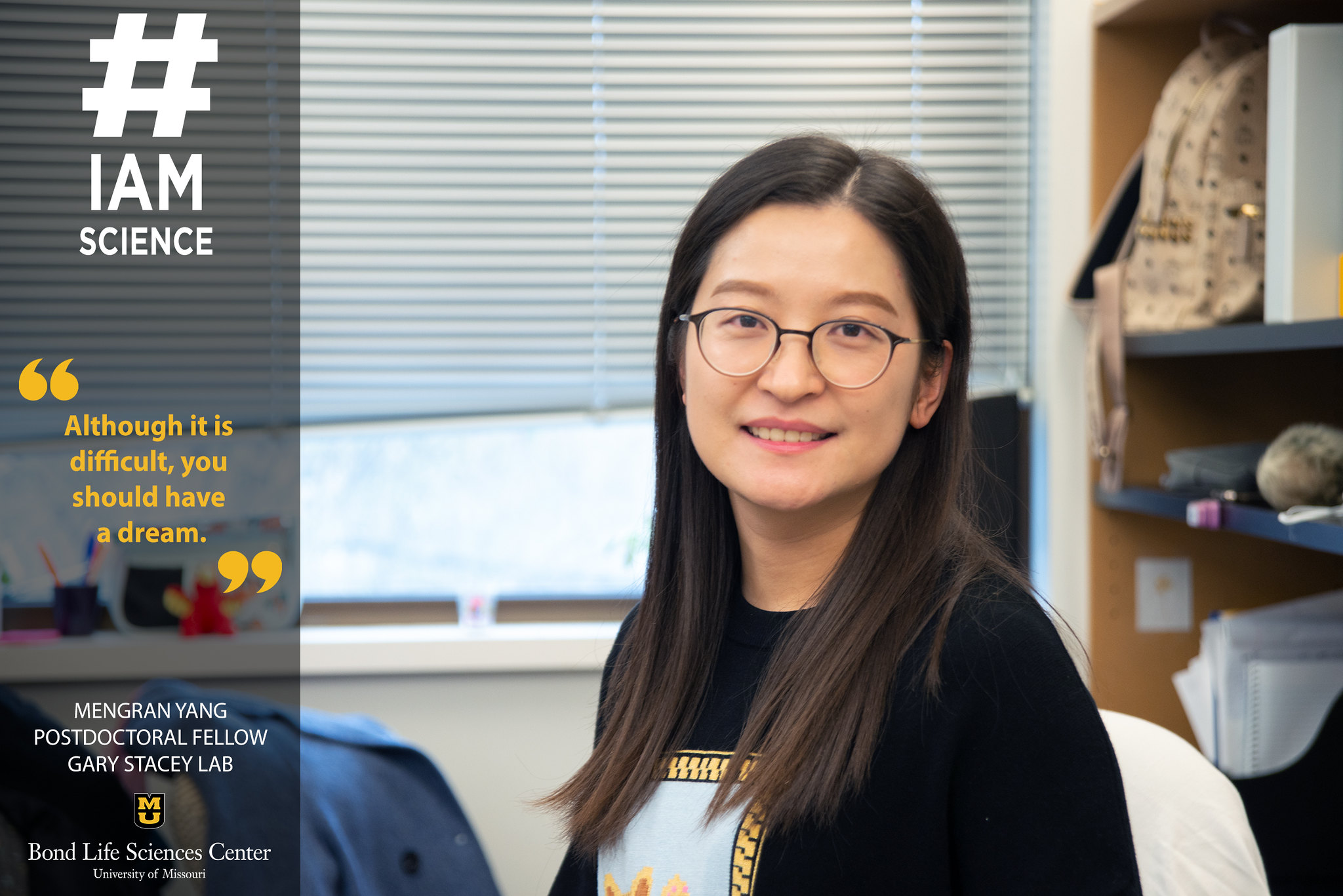 Mengran Yang sat perched on a stool too tall for the cart of lush green tobacco plants in front of her. Behind towering shelves of lab equipment, she hunched over the plants and steadily pricked each leaf with a syringe.

Yang works with Arabidopsis and tobacco plants to learn about plant immune systems as a postdoctoral fellow in the Gary Stacey lab. Her research focuses on signals plant cells send to coordinate a fight against pathogens.

“I think it’s very interesting to see how plants can defend against the pathogens,” Yang said.

Just like humans have immune cells that fight germs, plants have a network of cells and signals to deal with harmful microbes. This system is particularly important for plants since they are rooted in place and cannot avoid the attackers in their environment.

The plant immune system protects it both inside and outside its cells. Proteins inside the cell can recognize molecules from invaders and trigger an immune response, and the second — the part Yang’s research focuses on — uses receptors on the surface of the cells to recognize molecular patterns from microbes to signal for the plant to get rid of the pathogen.

Yang’s work with the lab started when she moved from China to Columbia for her postdoctoral research at Mizzou. Although originally drawn to the lab because of Stacey’s prominence in the field of plant immunity and signaling, Yang stays because of the community within the lab.

“Our lab is very international — some people are from China, Korea, Brazil, Vietnam and India,” Yang said. “A lot of the same-aged girls will go out for fun.”

This community stems from Stacey’s emphasis on the team’s collective success.

“You try to develop an esprit de corps in the lab where people care about each other’s success,” Stacey said. “They’re taking care of themselves, but at the same time, they care about other people’s success.”

Becoming a good researcher started with strong academics, and Yang remembers being the top of her class in biology, physics and math in middle school and high school. When she started her studies at the university level she followed her growing interest in biology.

Growing up with her twin sister in China, Yang recalls societal pressures to fill any spare time with more study. Her parents thought her teachers gave too much homework and pushed back on this expectation.

“My father thinks this kind of education is not good, he thinks you need to promote your efficiency and not just work hard,” Yang said. “You need to study smart, not just hard, and I think my dad influenced us a lot.”

Yang applies this mentality to her research and is supported by Stacey who encourages her to plan experiments and life goals.

“While I was a Ph.D. student, I spent the most time in the lab for fun,” Yang said. “But now I’m good at scheduling stuff, so I schedule my experiments at least a week ahead.”

Stacey works with Yang to ensure her future impact as a researcher. When picking a project, Stacey guides his researchers towards projects with lots of potential.

“That’s the kind of discussion I have with people, what’s the best project for them where they have the chance to make an impact,” Stacey said.

With her lab mates and other research labs, Yang collaborates to strengthen each other’s weaknesses. If she does not have experience with an experiment, Yang asks other postdoc students with more experience for help with her project. When she publishes her research, she makes sure to give credit to the other students who helped her.

“In Chinese, ‘shuangying’ means ‘good to both sides,” Yang said. “That’s very common. You will read a paper, and you can also see most [papers] have a lot of authors there. That’s the cooperation.”

After finishing her research in the U.S., Yang plans to return to China to continue doing what she loves — research.