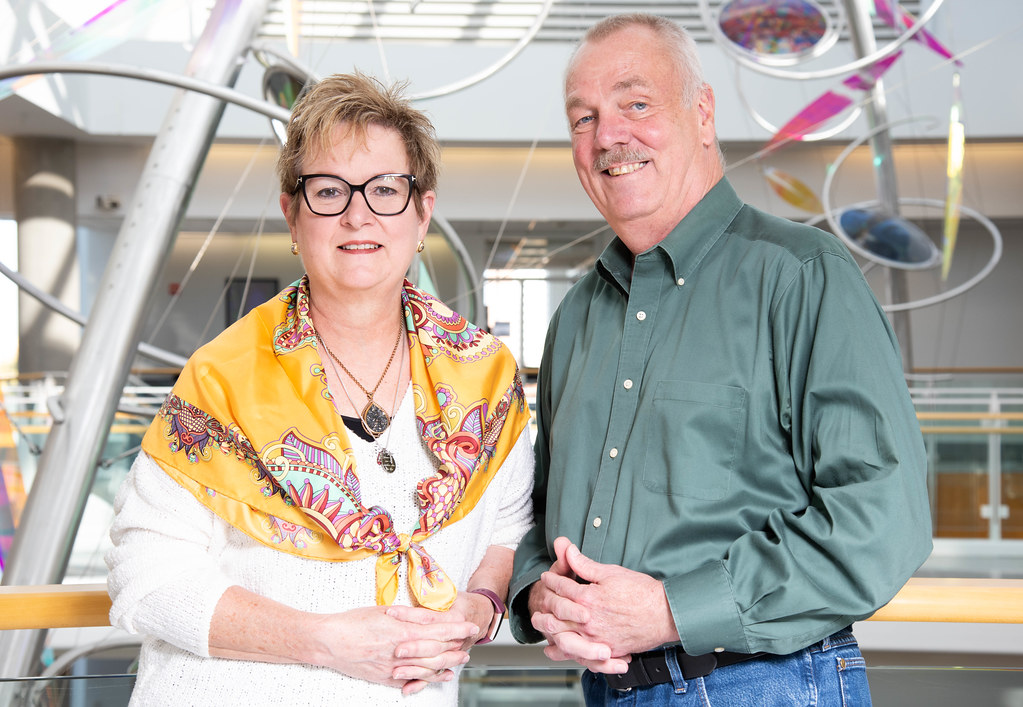 Fascinated by the bacterium responsible for bacillary dysentery, Bill studies its structure and function, while Wendy aims to use information on that same bacterium for healing.

“I do the vaccine stuff, but he’s a protein chemist. So the proteins are what keep us together,” Wendy said.

As two of Bond LSC’s newest investigators, the couple brings pathogenic microbiology expertise to the center. Their hiring is part of MizzouForward, an investment that aims to elevate and promote the University of Missouri as one of the best research universities in the nation.

The bacterium they study, known as Shigella flexneri, has a structure on the surface that is shaped like a needle and syringe — a structure that makes it easy to inject proteins into intestinal cells. It essentially reprograms the cells, which allows it to continue infection. The Picking’s labs study the same bacterium, but each investigator has their own projects.

“Bill has his structure work, I have my vaccine work. That’s how it’s split, but it’s so intertwined and the labs are intertwined that there would be no way to divorce us,” Wendy said.

Wendy uses proteins from the tip of the bacteria to create vaccines. Her goal is to get her work into clinical trials.

“There’s what’s called the valley of death,” Wendy said, “from the time that you have proof of concept to the time it goes to the clinic. There’s at least 10 million dollars in there,” Wendy said.

Bill’s research is focused on how the bacteria is structured — an interest that developed during his protein chemistry graduate work at the University of Kansas. Bill’s experiments involve mutating the bacteria and analyzing how the “needle and syringe” system — known as a type III secretion system — works.

“It’s purely curiosity and being able to break things and put them back together,” Bill said.

The two labs often collaborate as each lab’s work sometimes fills in the gaps for the other. The two investigators often work on the same projects.

“We have really complementary expertise,” Bill said. “Those are the best collaborations, when she does things that I don’t do, and I do things that she doesn’t do.”

A few years behind Bill in her studies, Wendy started off working in his lab. Her work quickly outgrew the scope of his research and the two split into their respective specialties and began working as collaborators.

The couple’s only impression of Columbia for years was the drive home to Kansas from St. Louis University.

“It really wasn’t until we came here and started actually getting into the town or the city of Columbia that we got an appreciation for just what all is here. It’s actually really nice,” Bill said.

Wendy finds herself often occupied in the lab, but she quilts when she gets a chance.

Bill hopes to utilize Columbia’s many fishing sites, and he also brings microbiology into his home as he pickles his own food.

MizzouForward is a transformative, $1.5 billion long-term investment strategy in the continued research excellence of the University of Missouri. Over 10 years, MizzouForward will use existing and new resources to recruit up to 150 new tenure and tenure-track faculty to address some of society’s greatest challenges. Investments also will enhance staff to support the research mission, build and upgrade research facilities and instruments, augment support for student academic success, and retain faculty and staff through additional salary support.