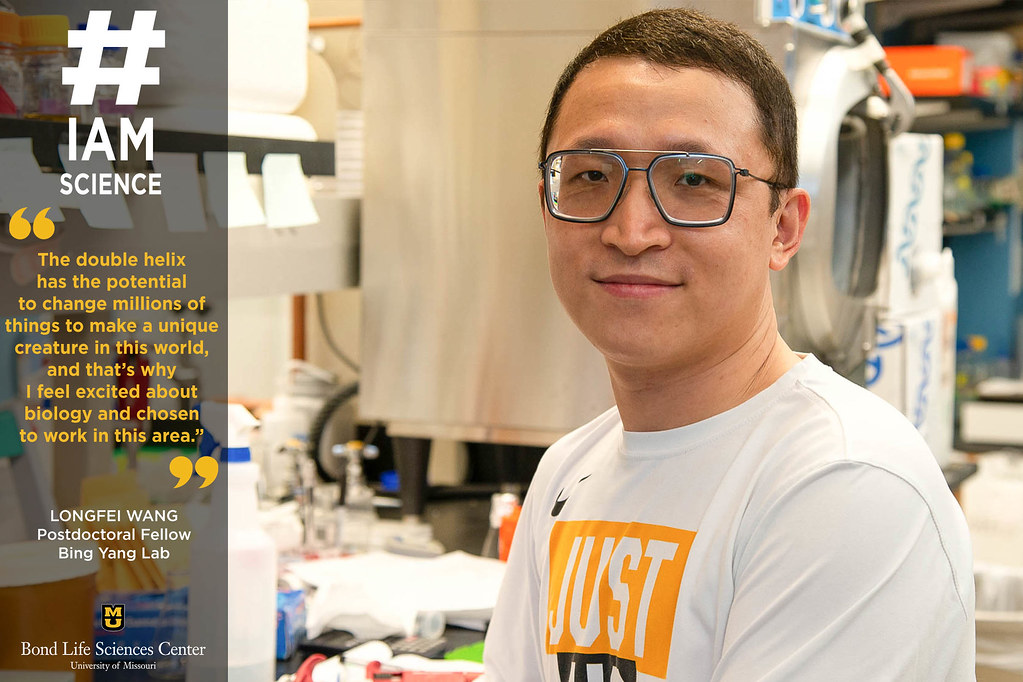 Longfei Wang, like many, was in high school when he realized for the first time what he wanted to be when he grew up. In his case, it happened to be choosing the path of a biologist.

His fascination with a well-known fundamental biological structure was the main factor in his decision.

“I was thinking the DNA double helix looks awesome,” Wang said. “This structure is identical for everyone, but each person is unique, at both [a] physical and mental level, which indicates how miraculous this double helix is,” said Wang.

This led Wang down a path towards plant science. The postdoctoral fellow currently works in the Bing Yang lab, but earned his bachelor’s and master’s degrees in plant science from Northwestern A&F University in China, something he always knew he wanted to pursue. He then went on to receive his Ph.D. at Purdue University in plant pathology.

While attending Purdue, Wang studied the pathology of viruses in model plants of tobacco, created in a lab setting to study a specific aspect of how the plant works.

Wang found that although work with model plants was important, he wanted to take a different route in his career and switched to studying crop plants. On a search for new opportunities, he found Bing Yang’s lab work on pathology, in rice.

“That really attracted me a lot. I called him and luckily I found a position here” Wang said.

“I like the diversity of the lab,” Wang stated, when describing his experience, and how he enjoys having people of many different backgrounds in that environment.

His switch to crop-oriented research has larger economic impacts that the public can tangibly see. These results can be seen in the number of crops produced and studied each year. Wang is excited about how that will yield economic changes.

Wang’s work in the lab focuses on the bacteria Xanthomonas oryzae, which can cause disease in plants, which can affect more than 400 plant species.

Wang, along with others in the lab, conduct research independently “to explore the interaction between the Xanthomonas bacterial and the host plant to rice.”

Wang explained that to increase plant resistance, they first modify the rice genes using CRISPR technology then, test that genetically modified organism. In doing so, he can explore how, molecularly, Xanthomonas oryzae interacts with the host.

When the rice gets infected

Wang works on finding a protein with this bacterium, it results in a 30 to 40 percent yield loss of the crop.

To combat this loss, this research is focused on finding a protein that can stop the way the bacterium infects and functions. This would create a way for the rice plant to recognize “foreign proteins” and allow the plant to prompt an immune response, stopping the bacterial infection in its tracks. This could result in an overall increase in the amount of crop yield, using this newfound information.

Wang plans to return to China and lead his own lab one day after his research in Yang’s lab is complete.

Other than spending 12 to 14 hours a day in the lab, Wang enjoys spending time with his two cats. Wang also spends his free time delving into science fiction novels in order to relax from the day, and he listed Harry Potter as one of his all-time favorite series.

“It’s just a place for me to take a break” said Wang.

With the same flare of magical plots wielded into the novels Wang reads in his spare time, he expresses his fascination and interest in how the double helix structure operates.

“The double helix has the potential to change millions of things to make a unique creature in this world, and that’s why I feel excited about biology and chosen to work in this area,” Wang said.