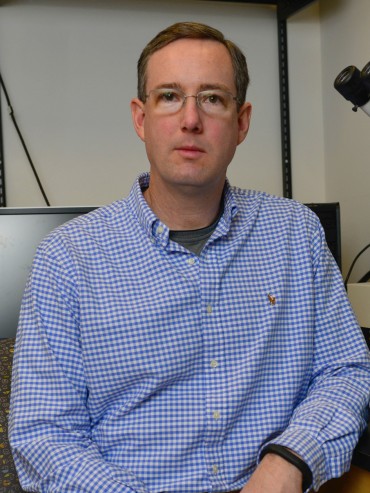 Christian Lorson is a professor of veterinary pathobiology and molecular microbiology and immunology (MMI). The Lorson lab focuses on spinal muscular atrophy (SMA), a devastating disease which affects one in 6,000 live births, and is the leading genetic cause of infantile deaths. SMA develops in children who are missing a specific gene called SMN1. The disease is characterized by degeneration and loss of lower spinal motor neurons, causing muscle weakness and atrophy, and often resulting in respiratory failure. In 2008, the Lorson lab investigated a compound that increases muscle mass. In 2010, the lab team, while studying mice, discovered a relationship between SMA and cardiac problems, which suggests that SMA is a multi-system disease and not confined to the nervous system. Currently, the lab is collaborating with several groups to develop new drugs that will encourage the body to produce more SMN protein, with a goal of moving closer toward clinical trial.